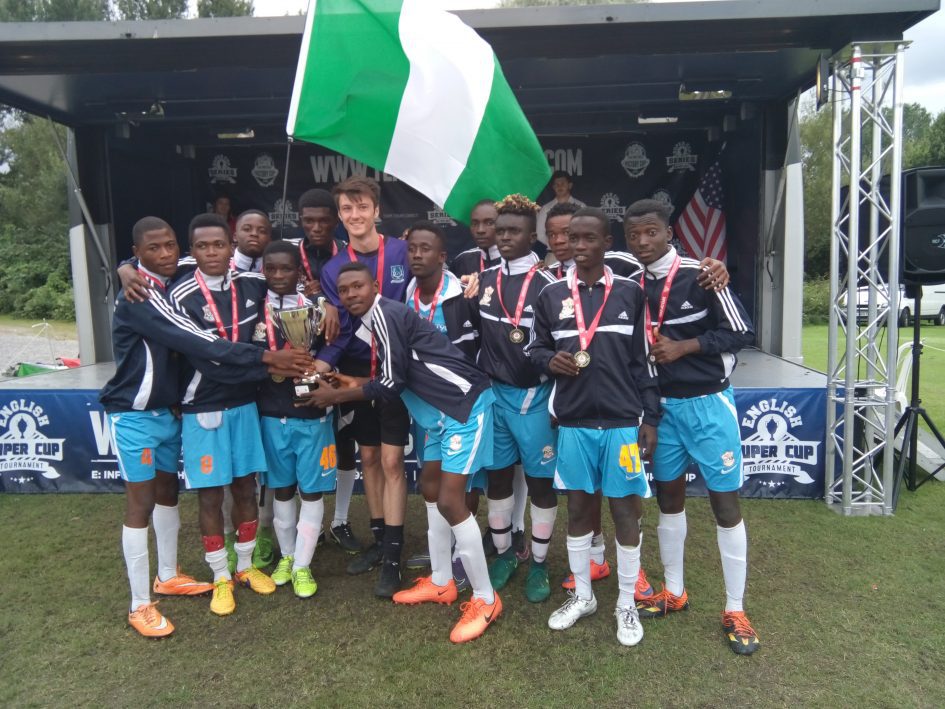 Lagos-based Buruj Sports Academy are the new kings of the 2017 English Super Cup after defeating Witworth Park 1-0 in the final played at the Manchester University stadium in Wythenshawe, Chester on Sunday afternoon.
Oseni Azeez was the hero of the day with his first half goal enough to see off the hard-fighting Witworth Park boys. It was Oseni’s third goal of the competition and he finished well behind teammate Dim Chinonso Nazareth who scored six goals in total including a hattrick in the first game against Pro Soccer Academy.
To emerge champions, Buruj Academy defeated Pro Soccer Academy 3-1 in their opening game before following it up with another 4-0 bashing of New Saints Academy. They lost to Future Elevens 2-0 but bounced back to win their semi-fianl 3-1 against Pro Soccer Team B.
CEO of Buruj Dr Salaudeen Waheed expressed his delight at the victory and thanked all those who contributed to making it a reality.
“Promise made, promise kept. We said we are coming here to win the cup and we did just that. I thank the boys and their coaches for making it possible. I also want to thank all our sponsors and supporters who contributed to make this trip a reality. We are not resting on our oars. We want to win more trophies and to come back here and defend our title,” he said.
Buruj Academy are the first team from Africa to win the prestigious tournament which is globally recognised and organised by Team Tours Direct.