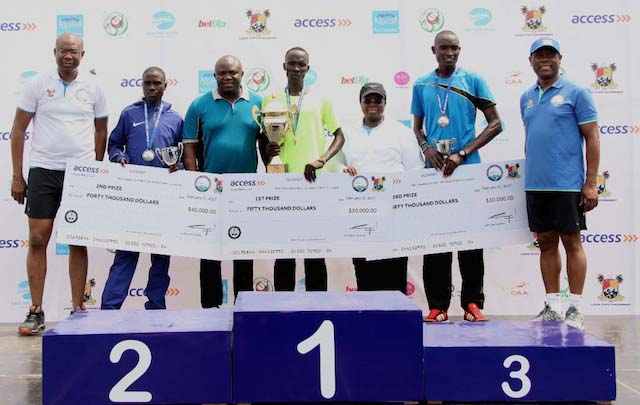 The management of Buruj Sports Academy has congratulated Lagos State governor, His Excellency Mr Akinwumi Ambode as well as the Special Adviser on Sports, Mr Ayodeji Tinubu over the successful conduct of the 2nd Access Bank Lagos marathon which took place last Saturday.

According to a release by the CEO of Buruj, Dr Salaudeen Waheed, it is heartwarming to see Lagos organise an event which has been described as being among the best not only in Africa but across the entire world.

“Conceptualising such an event needs a man with far-reaching vision which transcends the immediate and that is what his Ecellency has demonstrated by throwing his weight behind the project. To have successfully run a second edition which was bigger and better than the first is a sign of your implicit confidence in the potential of the Nigerian youth to attain their utmost if given the opportunity and for this you deserved to be congratulated, sir,” the release read in part.

The Special Adviser was also singled out for praise for his man-management skills which saw the conscription of several tested professionals into the project. This, Buruj said, is responsible for the global recognition the Lagos marathon has acquired in just its second year.

“Mr Tinubu has demonstrated an uncommon sense of professionalism by bringing in tested hands to run the project and this has rubbed off on the quality of its execution. We are pleased to note that like he does in other sports on which he advises the governor, Mr Tinubu has brought his midas touch to running running the Lagos Marathon and able to attract the buy-in of several corporate sponsors in the face of economic realities.”

The Buruj CEO also thanked the Special Adviser for promptly attending to issues concerning the Academy each time they passed through his table.

“While we appreciate all you have done so far, like Oliver Twist, we can only appeal to you to continue to assist the governor with a blueprint that will lift the face of sports and youth development in Lagos state.”

Buruj Sports Academy are scheduled to represent Lagos State at both the Dubai Super Cup as well as the Manchester Cup in the United Arab Emirates and United Kingdom respectively in April this year.