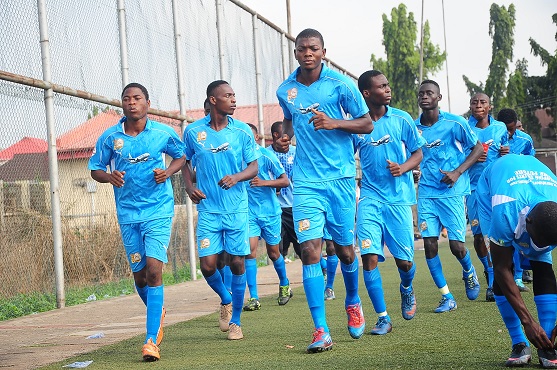 BURUJ PLAYERS RESUME TRAINING AFTER YULETIDE BREAK! -As MD Task Them To Take The Year By Storm Ahead Of International Outings!

Players of Buruj Sports Academy resumed their training activities yesterday after about two-week break granted them by the management and technical department to celebrate Christmas and new year festivities with their families and friends.
The resumption also coincided with the new academic session of various schools in Lagos and environs, to reflect the claim that the academy’s programmes and training schedule are tailor-made for young talents to combine sports with their academic pursuits in such a way that one will not negatively interfere with the other.
While receiving the players back to camp, the Managing Director and CEO of the academy, Salaudeen Waheed, admonished them to set good targets for themselves so that they can play their way to stardom in a year they will have the much needed opportunity to participate in so many international competitions beginning from the Manchester Cup which will hold in the United Kingdom in March.
He cited the case of Noah Salaudeen and Akuba Ignatius who just returned from the United Kingdom on Monday morning aboard the academy’s corporate partner, Medview Airline, saying many more of such opportunities will come up if they can take their training activities seriously and play to their coaches’ instructions in warm-up games.
He also challenged parents and guardians to support the dream of their wards by allowing them to combine both sports and academic works now that school activities have resumed and those who have already graduated to seize the opportunity which Buruj Academy can offer to maximise their God-given talents.