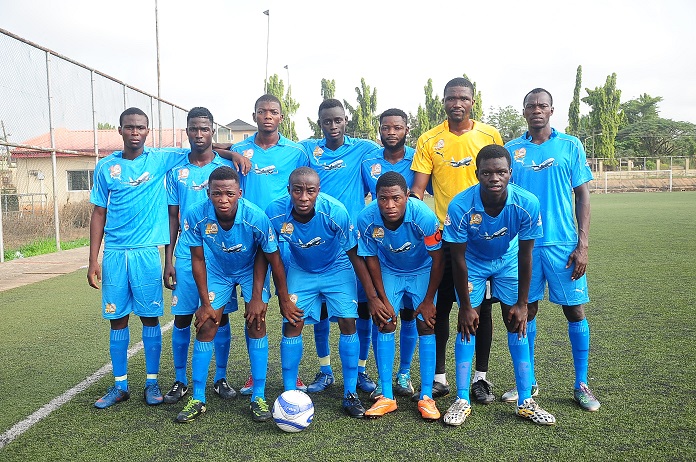 As the coaching crew of Buruj Sports Academy are beginning to package a befitting team that will feature in the much publicised Manchester Super Cup and Spanish Victory Cup in the first quarter of next year, some of the players in the camp are beginning to show promise based on their showing in some of the friendly games played so far.

Top amongst the youngsters is Nwaribeaku Stanley, a defensive midfielder, who was solid and assured again in Buruj Sports Academy’s encounter against Auto Football Academy on Tuesday. Others are Adeyera Tobi, a very versatile and athletic midfielder and scorer of Buruj Boys’ only goal in the 2-1 loss, Onwe Uchechukwu, a fine forward player with good eyes for goal-scoring and Uzo Victor Chibuzor, another very resourceful and enterprising midfielder.
According to the Managing Director of the academy, Dr. Salaudeen Waheed, the performance of some of those players in the competition organised in honour of football-loving Vice-Chairman of Ikorodu West Local Council Development Area. Hon. Sesan Dada, by the Ikorodu Football Association Council Of Coaches, the management and technical crew are beginning to see enough in terms of what it takes to be part of the train to Europe in March and April, next year.
He also expressed optimism that other players in the camp and those who will still register will be well-drilled and taken through their paces before the deadline time.
“We are beginning to see what we want to see in some of the players based on their performances in some of the recent games they featured in. For instance, in our last match against Auto Football Academy, players like Stanley, Tobi Adeyera, Once Emmanuel and Uzo Victor stood out among the rest.”
“Though we lost the game which was the second loss in the competition, but a closer look at the performance shows that before the closing of the registration, we will have a team that will represent us and players that will distinguish themselves in the eyes of foreign scouts. ”
“That’s the reason why we are calling interested players to come forward to register and train with us. Both those who are in camp presently with us and those who will register subsequently will be given a level-play ground before we submit our squad list to the organisers,” he disclosed.
The final group game of the competition involving Buruj Sports Academy being coached by ex-Super Eagles midfielder Ishola Shaibu will be played on Friday at Alasalatu Playing Ground,