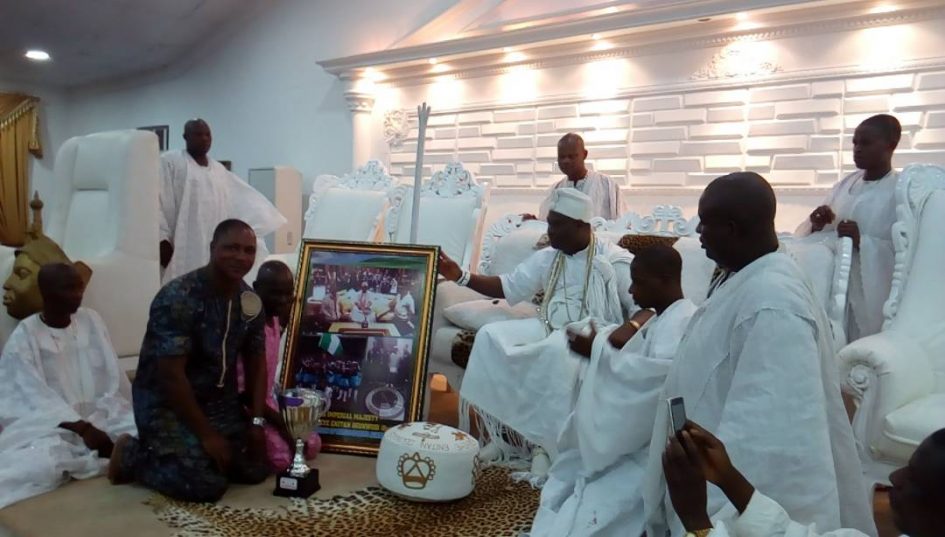 For the support received by the team during the playing tour to the United Kingdom, Buruj Sports Academy on Tuesday visited the Ooni of Ife, Oba Adeyeye Enitan Ogunwusi, Ojaja II to show appreciation to the spiritual leader.

The Chief Executive Officer of the Lagos based academy, Dr Salaudeen Waheed led the delegation to the Oba’s palace at Ile Ife and presented a photo frame to His Imperial Majesty admits fun fair as the Oba hosted traditional chiefs for the annual indigenous festival.

Oba Ogunwusi graciously supported Buruj Sports Academy in London when he hosted the English International Super Cup Champions and expressed willingness to back the academy’s activities even as they plan to mark the 10th years anniversary in grand style.

While briefing Oba Ogunwusi on the success achieved by the academy in which three of the players that took part in the youth tournament in the city of Manchester were admitted by Boreham Wood Football Club after trials, Dr Salaudeen said the support of the king was pivotal and behoves the management to come to his palace at Ile Ife to show gratitude.

The CEO also informed Oba Ogunwusi on the plan to embark on another playing tour in September to maximise the gains of participating in English International Super Cup in Manchester earlier this month.