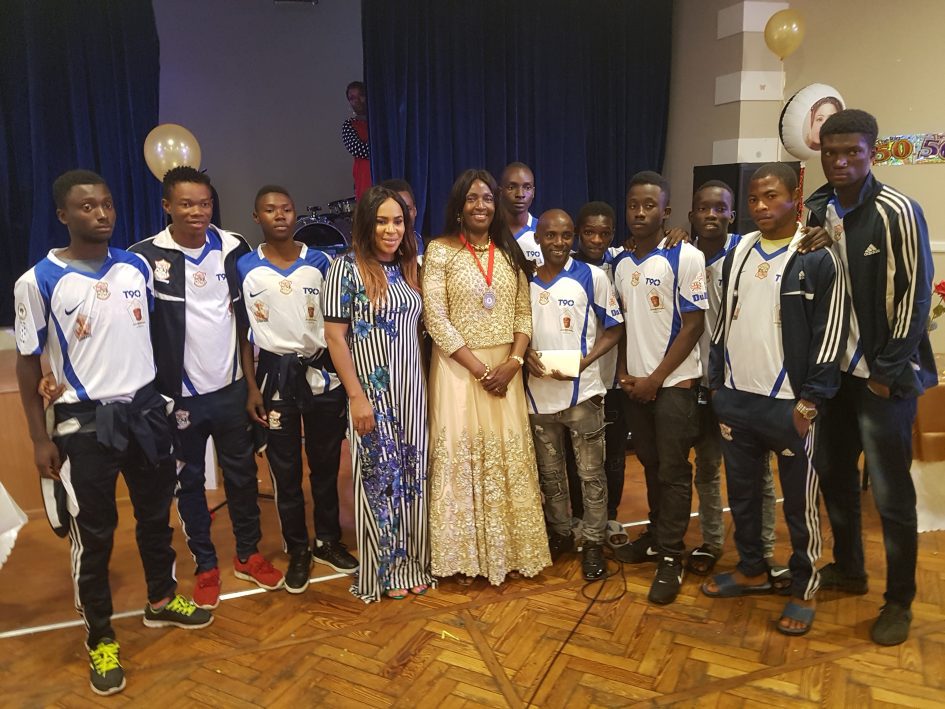 Reverend Mother Esther Abimbola Ajayi, Founder of Love of Christ Generation Church has been conferred as the Life Matron of Buruj Sports Academy as preparation for the 10th years anniversary of the academy commenced.

The spiritual leader of the London Based church was presented with a commemorative medal and pronounce the life Matron of the academy by chief executive of the academy, Dr Salaudeen Waheed.
The English International Super Cup champions on Sunday paid a visit to Reverend Ajayi in Clapham North, London and enjoined her to be the life Matron which she accepted with the promise to support activities of the Lagos based academy.
Reverend Ajayi who had earlier hosted the team after their success in Manchester praised the academy for representing Nigeria very well in the United Kingdom. She rewarded the team for winning the English International Super Cup.
“Football is a very good platform to empower young people and keep them away from crimes. We will continue to support you and make sure we bring more youth out for them to showcase their talents. On behalf of the church, I thanked you for this honour and I implore other well meaning individuals to help the academy that is progressing and helping the less privilege”. She said.
It will be recall that Buruj Sports Academy defeated Worth Park Boys Football Academy one zero in the final to lift the trophy. They beat Pro Soccer Academy from London 3-1 in their opening game and followed it up with another 4-0 bashing of New Saints Academy from Cardiff, Wales. They lost to Future Elevens Academy 2-0 but bounced back to win their last group B game against Elite Soccer Academy from the United States of America 1-0 before their emphatic 3-1 win againsPro Soccer Academy Team B in the semi-final.
Following their remarkable feat of winning the English International Super Cup, three of the academy players were admitted on trials at Fulham Football Club.
The players; Noah Salaudeen, Azeez Oseni and Abubakar Abdulsalam were lucky to earn a chance to impress coaches of the English championship side and the trio wowed handlers at the Fulham Football Club training round over the weekend