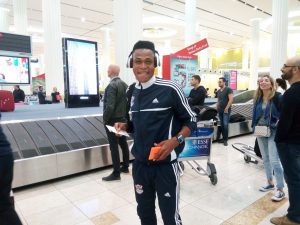 Buruj’s young striker Chidi Stanley will be sold for nothing less than about €450,000 after receiving offers to feature for Besiktas JK of Turkey youth team preparatory to signing his first professional contract with the former club of Daniel Amokachi.

The fair-skinned striker will jet out to Turkey to be accompanied by the Managing Director/CEO of the Ikorodu based academy, Dr. Salaudeen Waheed, who has been acting as intermediary and in constant touch with Besiktas Director of Youth Football, Emrah Barakhtar.

According to Dr. Salaudeen, Chidi Stanley is a very promising striker who is improving with each passing day and the opportunity given to him to feature for Besiktas youth side is one that will be beneficial to both the player, other players and of course, the academy’s management in the long run.

He also disclosed that the management of Buruj Sports Academy are open to discussion with any Nigerian player that is willing to seize the opportunity just like Chidi who recently received all his travelling documents and paper works and will storm Turkey in the next couple of weeks.