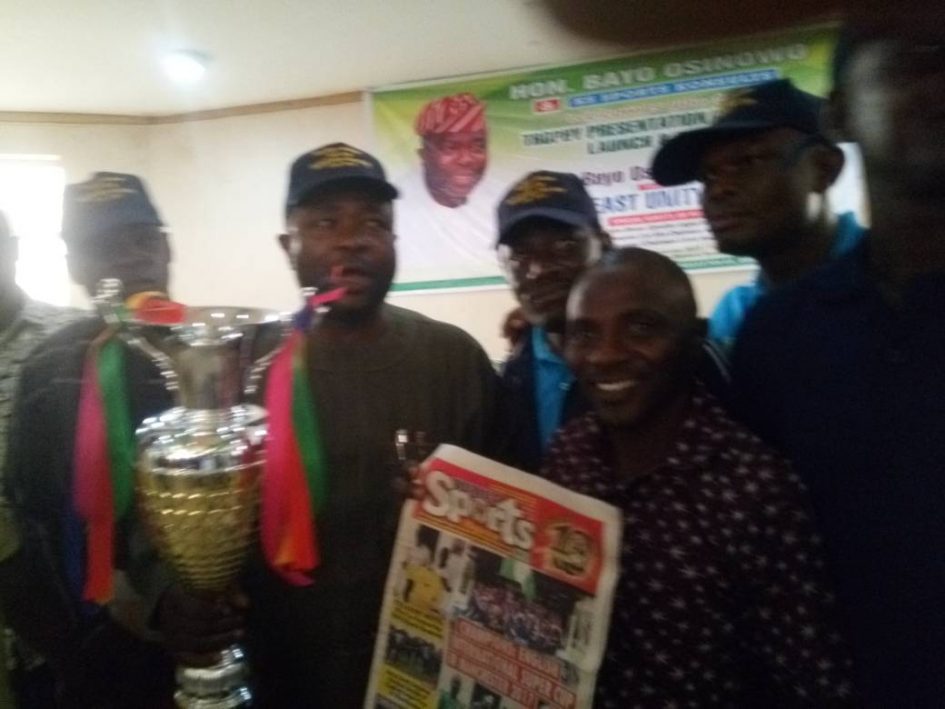 HON.BAYO OSINOWO GOLD CUP: BURUJ MD PROMISES TO DAZZLE SOCCER FANS IN HIS ROOT! -As The Team Is Set To Play In Group B Of Lagos East Unity Cup.

HON.BAYO OSINOWO GOLD CUP: BURUJ MD PROMISES TO DAZZLE SOCCER FANS IN HIS ROOT!
-As The Team Is Set To Play In Group B Of Lagos East Unity Cup

Buruj Sports Academy will play in Group B of the inaugural Hon.Bayo Osinowo Gold Cup competition alongside the likes of Gallant FC, Funsho Progressives FC and Current FC, following the draw that was held inside Agape Hall in Gbagada Area of the city on Thursday afternoon.

The competition which is being organised as an avenue to bring together the youths of the area with a view to providing an enabling environment for them to showcase their football skills, will see 16 teams play in 4 groups in the preliminary stage, while the overall winner will cart home a cash prize of 1million Naira with a giant trophy.
The second placed team will get N500,000, the 3rd placed N300,000 and the 4th placed N200,000- all being bankrolled by the sports-loving Hon. Bayo Osinowo- aka Pepperito.
The highlight of the well-attended programme which was a brainchild of KS Sports Konsult, was the recognition of Buruj Sports Academy’s CEO, Dr. Salaudeen Waheed, for his outstanding contributions to the development of grassroots football, not only in the area but the entire country. He was invited to join other dignitaries and ex-internationals in attendance, like Godwin Okpara and Segun Fetuga, to pick the draw balls.
Speaking at the event, the highly elated Hon. Bayo Osinowo, disclosed that his decision to give his full support to the initiative of the organisers, is borne out of his desire to give back to the constituency that has been supporting him in the past 16 years as a representative. He also re-emphasised the importance of sports, most especially football, as a veritable tool for socio-economic development the world over, adding that any country that fails to key-in is living in the past.
Meanwhile, the Managing Director of Buruj Sports Academy, Dr. Salaudeen Waheed, who attended the draws alongside the Head Coach and former Super Eagles midfielder, Ishola Shuaibu, and two players of the Ikorodu-based academy has vowed to prepare the team very well for the competition that will take off in the 2nd week of January with a view to winning all the prizes at stake.